This means that girls with ADHD are often overlooked and neglected by the systems that are supposed to be there for their support.

And in the case of my daughter, while we are parenting girls with ADHD, it has been a struggle to get her the help she needs.

I’ve known for years that my daughters have ADHD. Since my eldest was three years old she struggled with attention, executive function, anxiety, and emotional dysregulation.

My second daughter has shown symptoms of ADHD from birth and also exhibits many classic signs of autism.

When my middle daughter was 4 years old and barely talking, we took her in to be evaluated by our local school. We were concerned that if she had difficulty communicating that she would struggle in school.

They accepted her into their inclusion pre-K program on a trial basis for an autism evaluation and eventually diagnosed her with PDD-NOS (now just ASD). During the year she was in the program, she made *amazing* progress.

By the end of her time in the pre-K program, the school thought she was ready to graduate into a regular classroom in kindergarten.

So, we enrolled her in the regular class.

But she struggled. We asked the school if she should be evaluated for learning differences or ADHD, but they told us to wait until she was at least seven to look into those things. They told us that most children catch up by second or third grade.

So, we waited. When first grade started, my daughter was about a semester behind the other kids in what she was able to do in the classroom. But still, the school assured us that she should be able to catch up.

At age seven, her teachers agreed that she was not making progress. They suggested we get her evaluated again and after about six more months, she did get diagnosed with ADHD.

I was very angry at the school for many months.

We’ve known that my daughter would require help since she was two. We’ve told her doctors and teachers for years that she struggles, that something is different, and that she requires different learning tools.

Her ADHD struggles almost weren’t enough to receive a diagnosis. (meaning, she doesn’t act like a boy with ADHD).

She isn’t autistic *enough* to receive support for that at school.

She hasn’t struggled *enough* for the school to be worried.

ADHD in Girls is Different

But I know that sometimes, “not enough” is still too much to function normally.

I see that my daughter notices that the other kids in her class are performing better in class.

I see that she is starting to lose confidence in her abilities in the classroom.

I see that she is pushed out, just a little, by many of the other kids for being different.

I see that she does her best to keep it together at school, only to come home and lash out because she’s kept her emotions bottled up all day.

I see that what comes easily to most people, is difficult for her.

It upsets me that kids at the higher functioning end of ADHD and autism get ignored.

I’m angry that diagnostic criteria are rigid and based on boys’ behavior.

I’m angry that my daughter is limited in the help that she can receive because she’s not struggling enough.

I’m angry that she’s not struggling in a way that allows her to get help today.

I’m angry that during all this waiting, she is writing a mental script that will negatively impact her self-esteem and self-confidence forever.

I’m angry that girls don’t get attention unless it escalates to violence or self-harm.

I’m angry that no one is listening.

But most of all, I’m angry that I can’t get my daughter the help that she needs.

How to Help Girls with ADHD

Researchers and professionals are just now realizing that girls with ADHD and autism have different symptoms. Most of the professionals we’ve talked to cling to old ideas.

We’ve been dismissed and rebuffed and ignored.

The only thing we can do is keep trying, keep insisting, and keep talking.

I know things will get better for girls in the future. 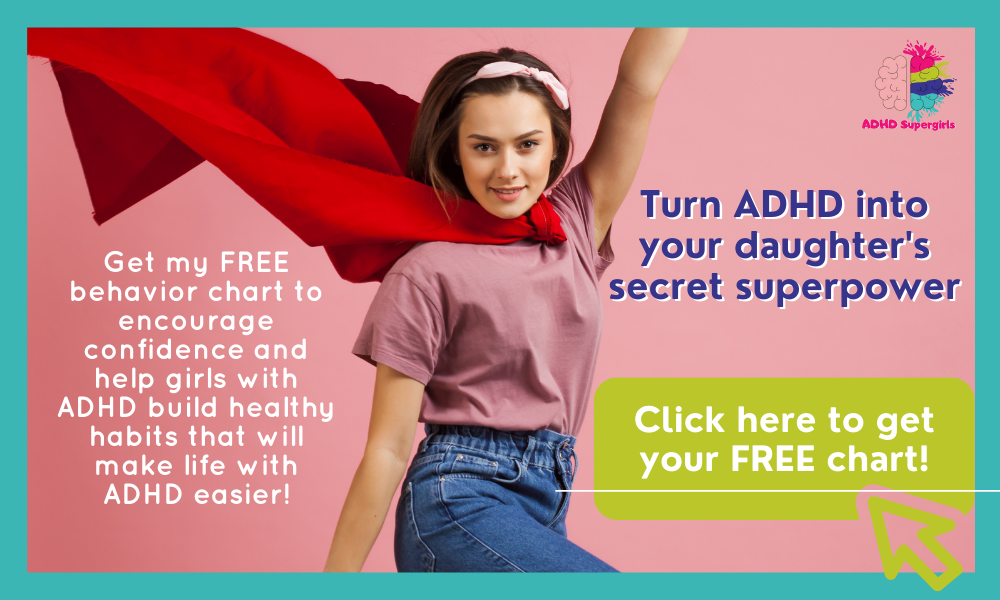 I started ADHD Supergirls so that more people would see the girls struggling. If I can help increase the visibility of girls with ADHD and help even one girl struggling with ADHD, then that is enough for today.

And we see your daughter and are here to support both of you.

Raising ADHD Teenage Girls: How to Manage ADHD Habits and Emotions in Girls